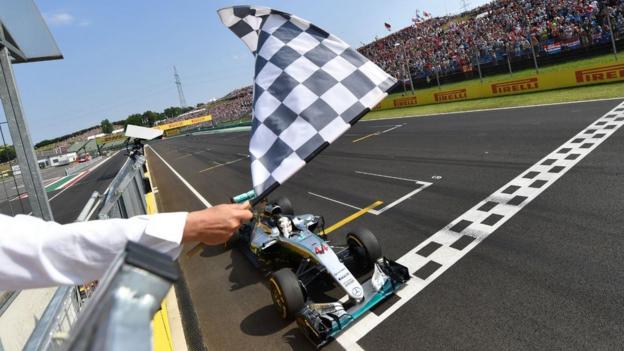 It was the race that had it all – spins, crashes, crazy weather and incredible results as Sunday’s German Grand Prix thrilled, amazed and excited us.

That is now three epic races we have had in a row – Austria, Great Britain and Germany – so can Formula 1’s resurgence carry on this weekend for the 12th race of the season in Hungary?

It is the last race before F1’s four-week summer break and Lewis Hamilton, ninth at Hockenheim, holds a 41-point advantage over Mercedes team-mate Valtteri Bottas, one of seven drivers to not finish in Germany.

Red Bull’s Max Verstappen took his second win of 2019 with Mercedes suffering their worst weekend of the season.

But the Silver Arrows will feel comforted by the fact Hamilton has won six times at the Hungaroring, including four successes in the past seven years, to be the most successful driver there with two more wins than the four Michael Schumacher managed.

The Hungaroring, just over 10 miles north-east of the centre of Budapest, first held a grand prix in 1986 and was the first race to be held behind the Iron Curtain. Then F1 chief Bernie Ecclestone wanted to stage a race in Russia but was convinced to go to Hungary instead and it has been part of the calendar every year since, and has a deal to stage races until at least 2026.

Hamilton won by 17 seconds last year with the Ferraris of Sebastian Vettel and Kimi Raikkonen coming second and third respectively, while Verstappen’s race ended on lap five with a loss of power and Charles Leclerc, then of Sauber, failed to complete a lap because of a suspension issue.

The 20 drivers will race 70 laps of the 4.381km 14-turn circuit and the weather forecast suggests showers for the opening two practice sessions on Friday, but, sadly, it is not expected to be a wet race like the one that caused so much chaos in Germany.

Pit stops proved crucial last weekend with Verstappen stopping five times on his way to victory and the tactical strategy is often vital in Hungary.

Last year Ferrari did not do two-time Hungary winner Vettel any favours as they delayed and then botched a pit stop which inadvertently left him behind Bottas, who repeatedly blocked off and delayed the German as Hamilton disappeared into the distance.

Bottas did such a good job at holding up Vettel that Mercedes team principal Toto Wolff later called the Finn a “sensational wingman”, something the driver took exception to, saying the description “hurt”.

This race has been good for Bottas’ Finnish compatriots over the years as Mika Hakkinen won in 1999 and 2000, Raikkonen took the chequered flag in 2005 and Heikki Kovalainen clinched the only grand prix success of his career in Hungary 11 years ago.

The championship and Bottas himself, who still does not know if he will be driving with Mercedes in 2020, could really do with another victory for Finland on Sunday and moving from Hungary wingman to Hungary winner.

You can follow all the action and the latest news on the BBC Sport F1 page and via the BBC Sport app, and catch up with analysis and interviews with the BBC Radio 5 Live Chequered Flag podcast.